The house competition theme was ‘Four Square House Design Problem – Homage to John Hejduk’ with a design brief based on the famous Nine Square Grid design problem. In a hypothetical Garden City grid of 36m by 36m, the assignment was to design four houses in any configuration, having as its only restriction that they should not exceed 162 sqm and that each possessed a garage and a garden, ‘technique and nature’ combined in the given 9m outlines. This required a consideration of issues such as orientation, contiguity, privacy, construction, spatial structure: a series of issues that ultimately engage the neglected notion of typology. To approach the subject we asked the master (and ourselves): Can a daily routine generate a housing typology? 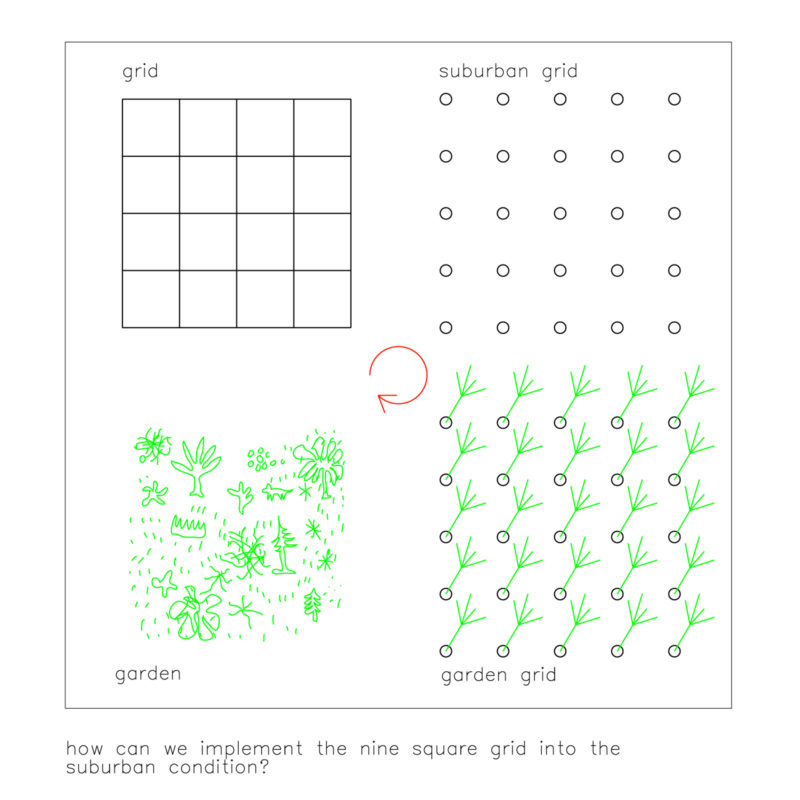 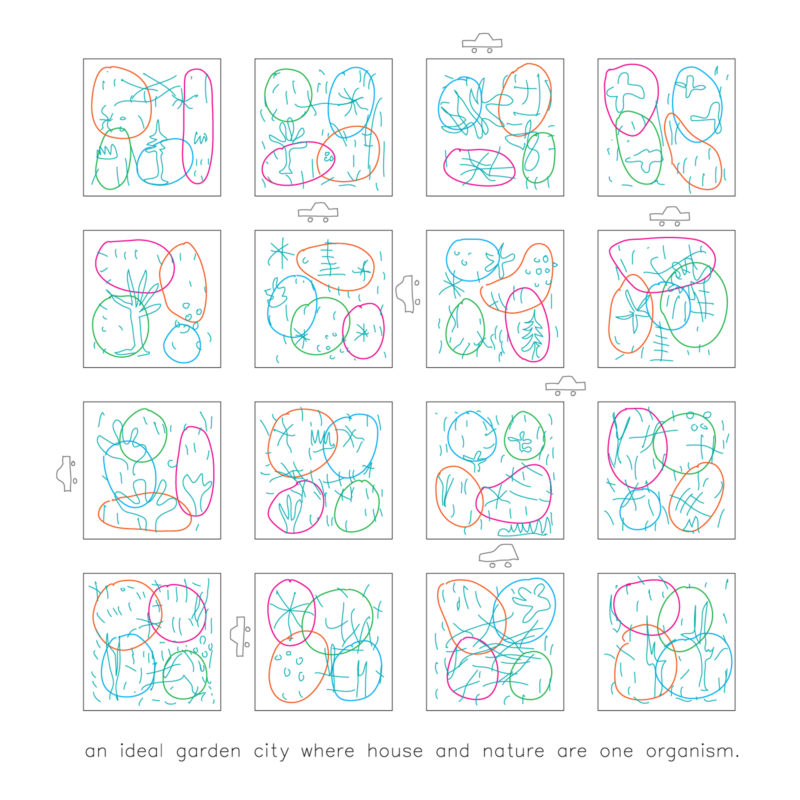 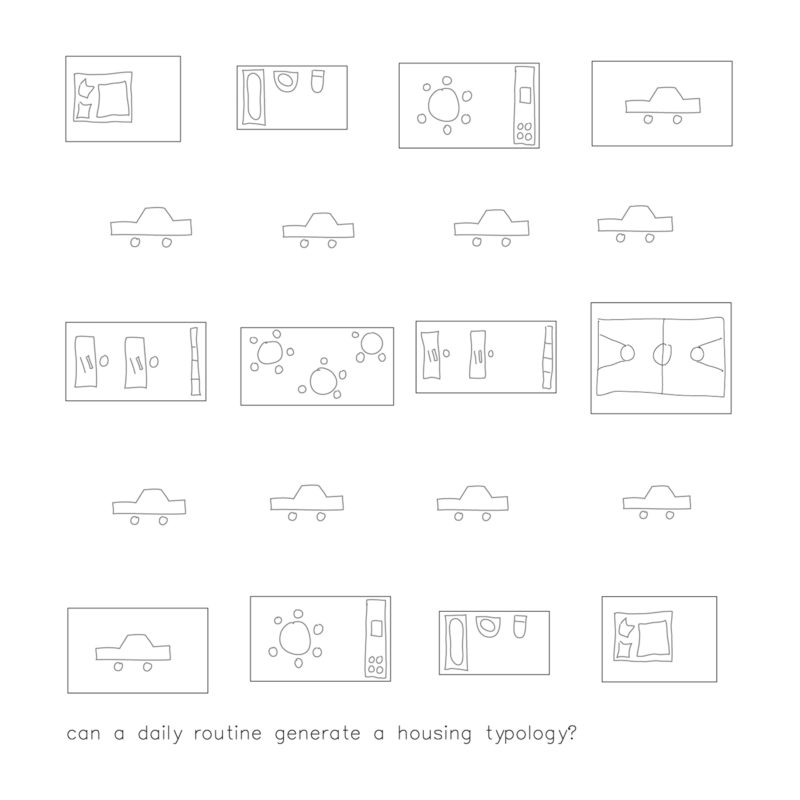 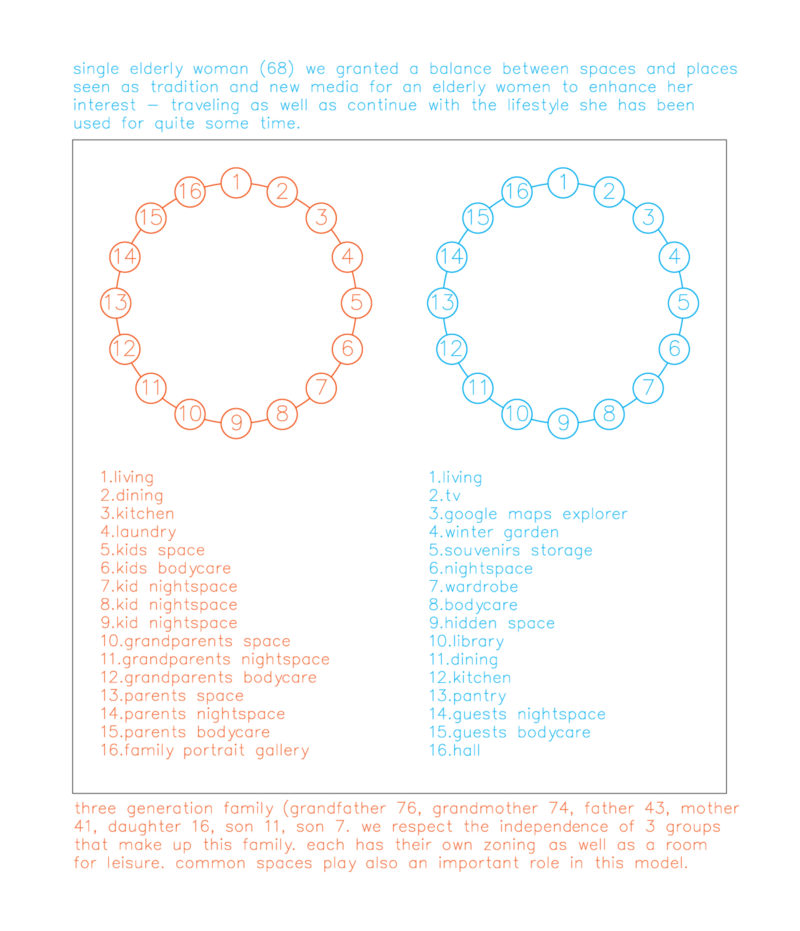 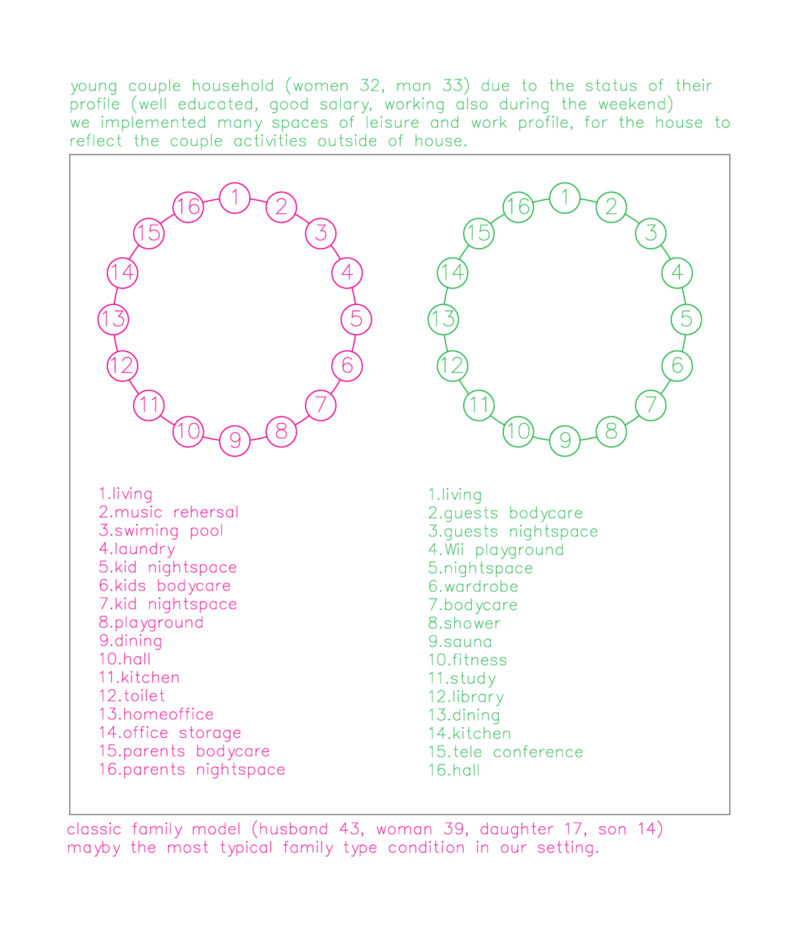 Single living individual will always move from point to point of the same trajectory every day – this is what we call a daily routine. When we look at the city as a big orthogonal grid and then at all its inhabitants’ daily routines linked together, we observe a galaxy where each of the points (just like stars) could be named after its function. Interlinking those points, we would create an individual’s map of events. Why cannot we generate a house like this? A house where certain events happen one after another on an unexpected spatial, open and vibrant trajectory. In this scheme the characteristic of nature (flora and fauna) overlap with the characteristic of architecture. They are both in an equal symbiosis. 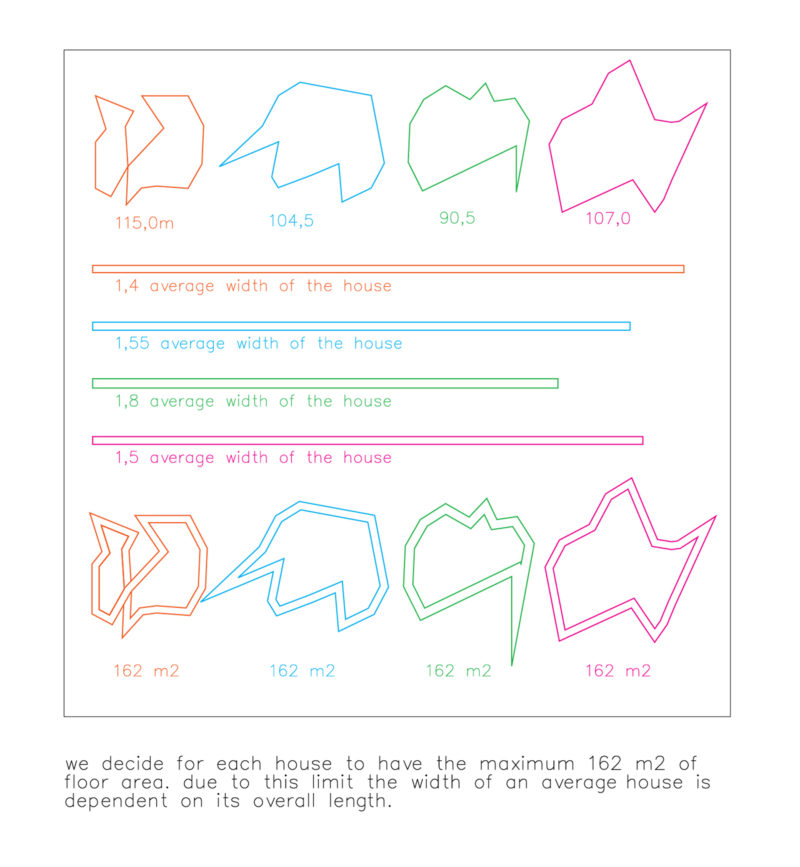 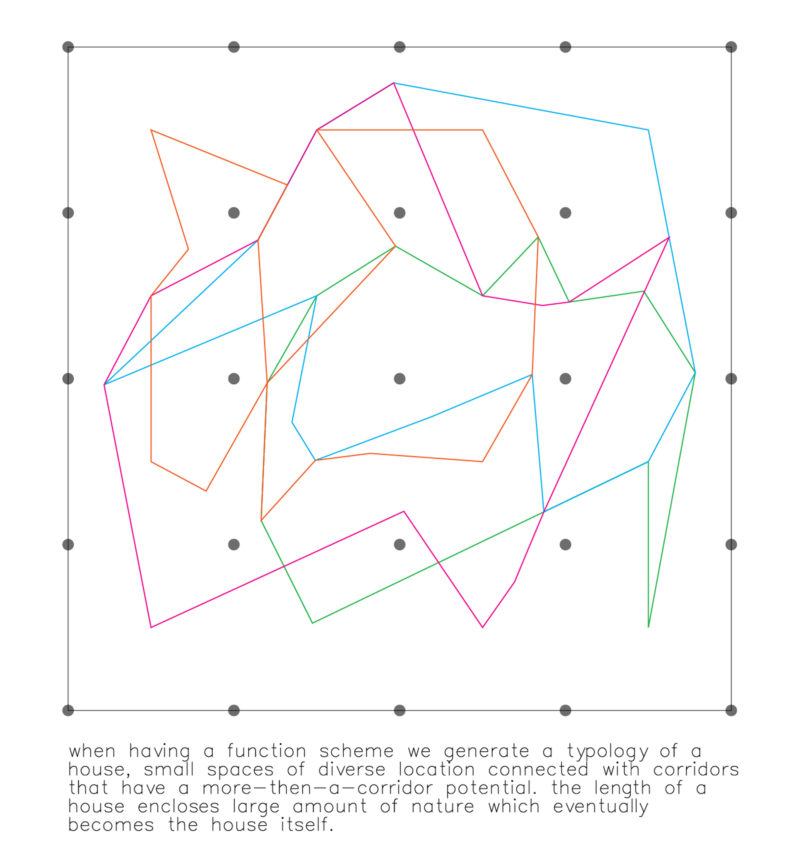 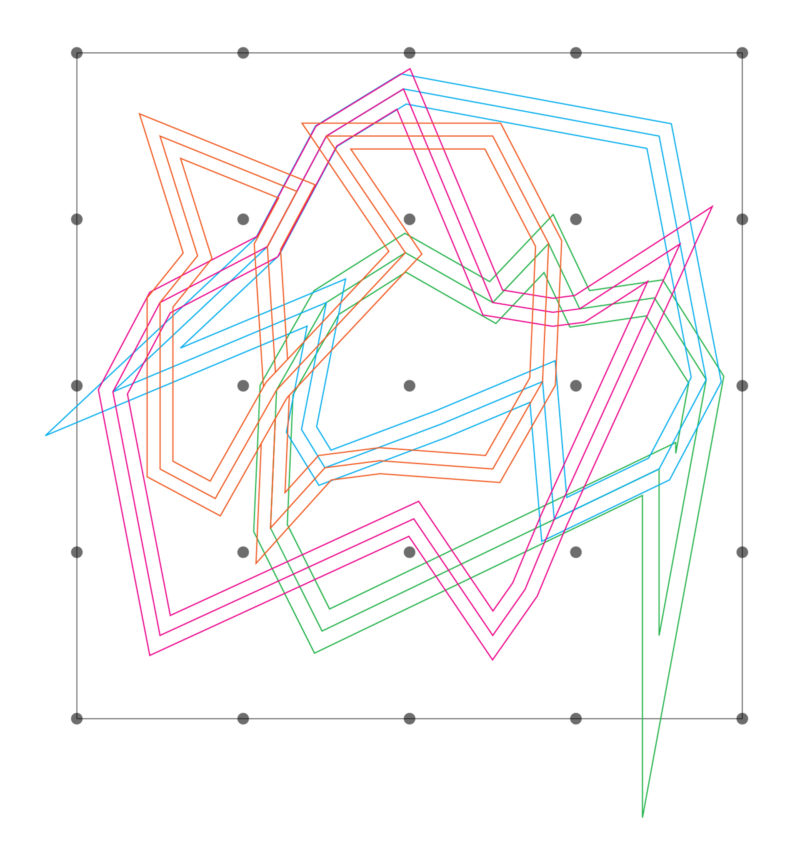 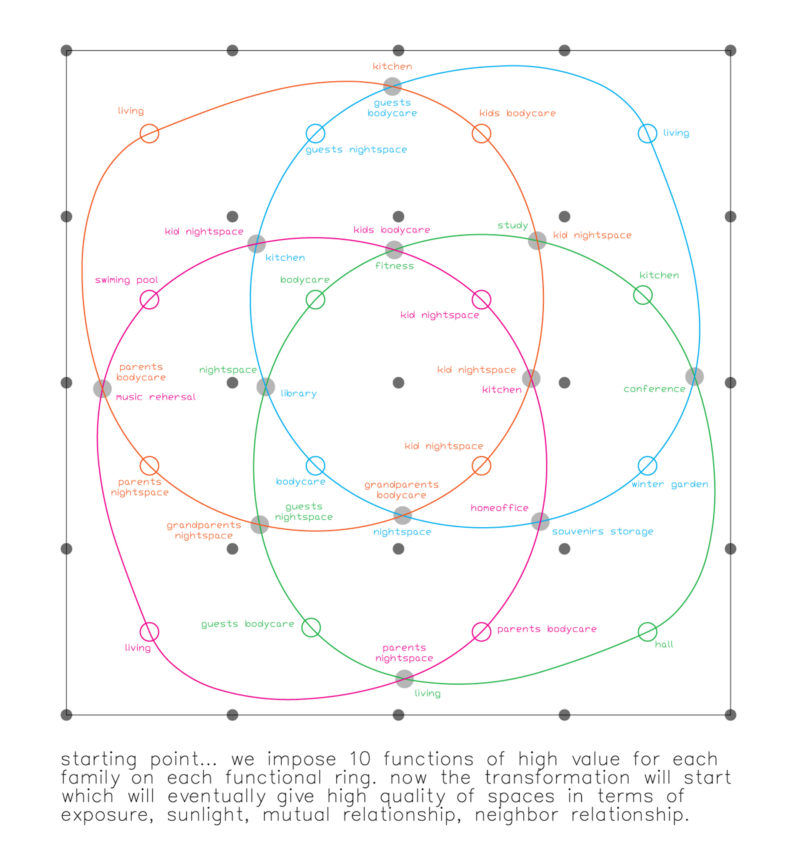 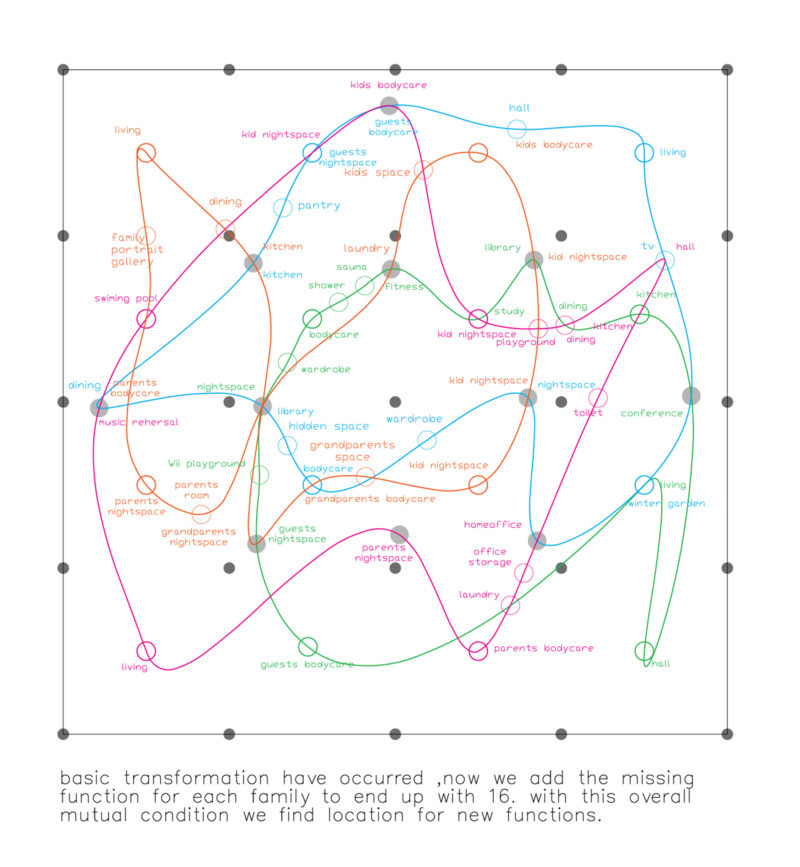 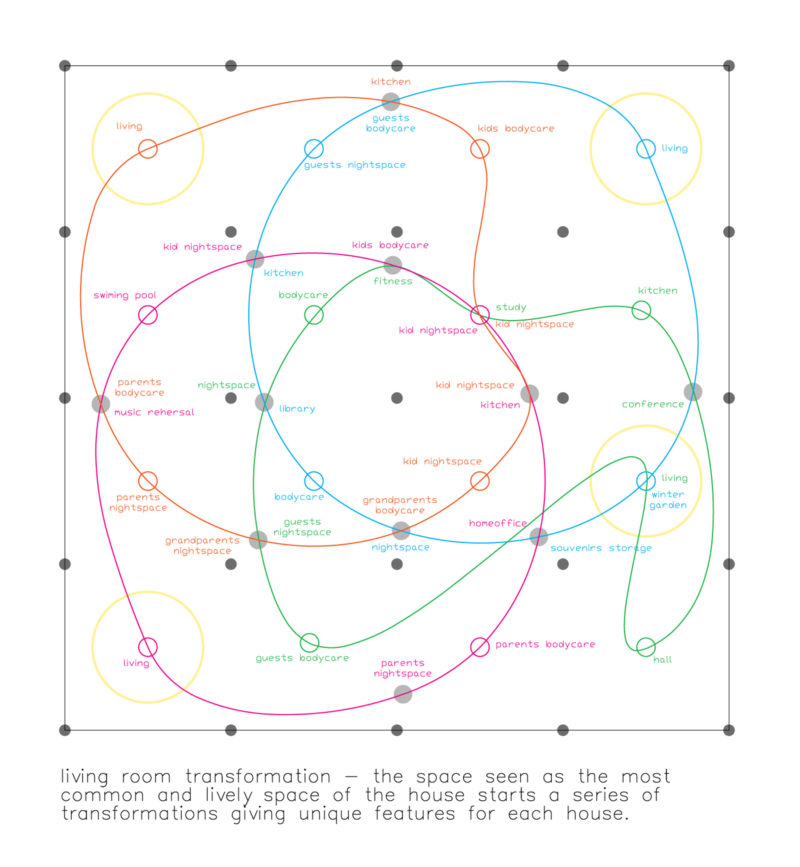 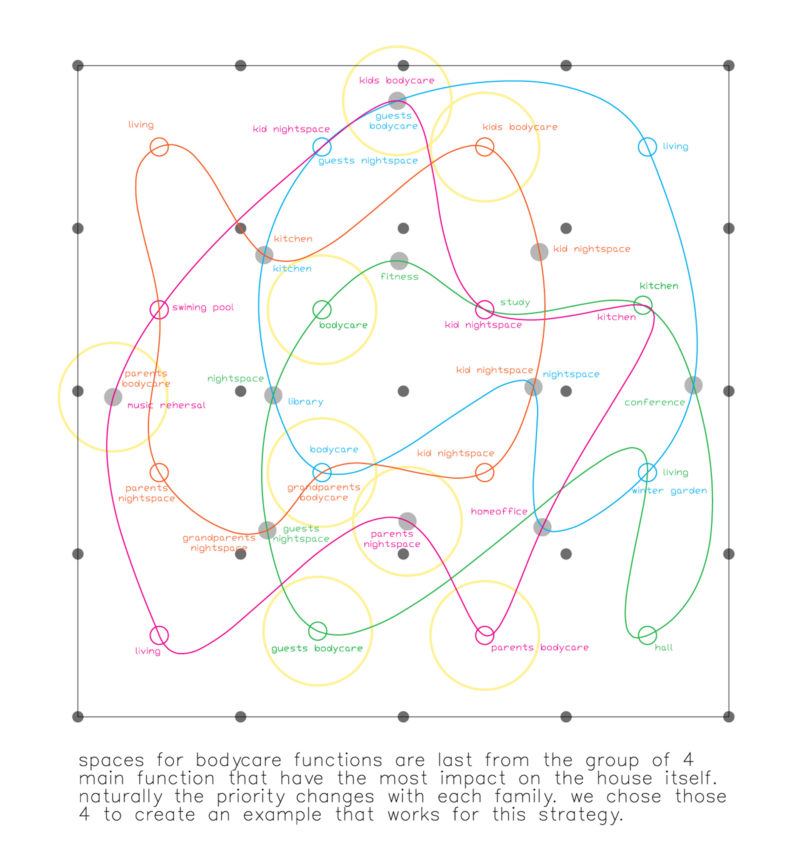 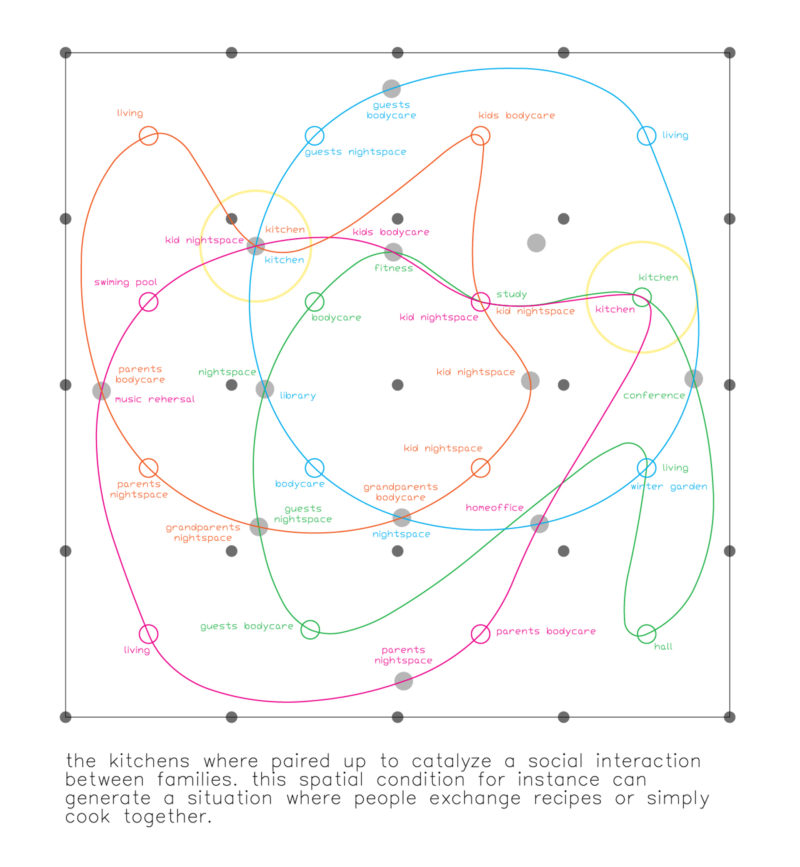 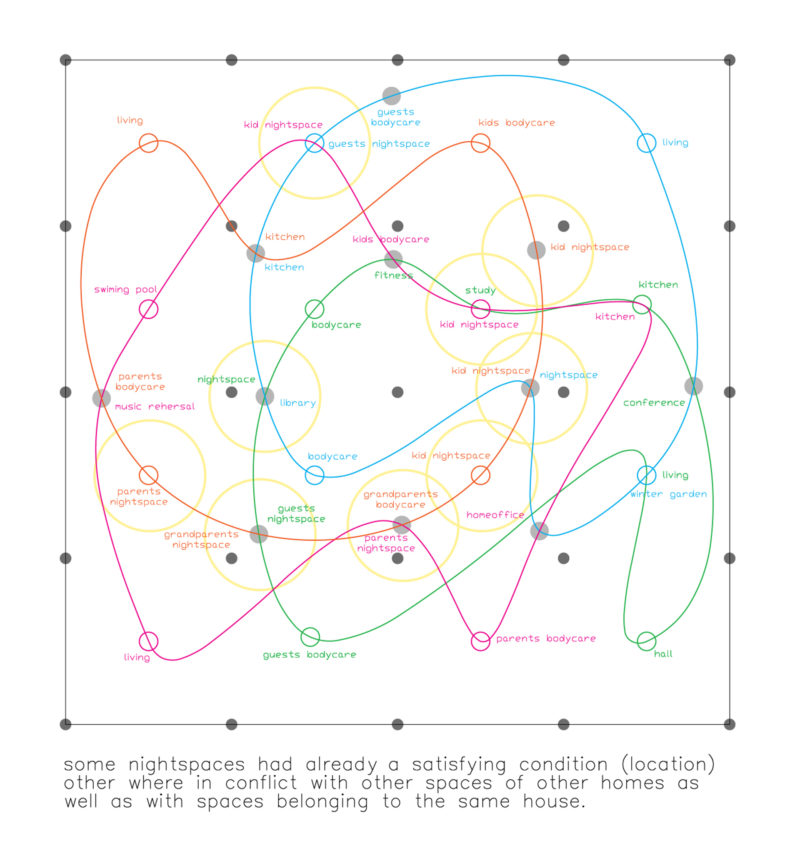 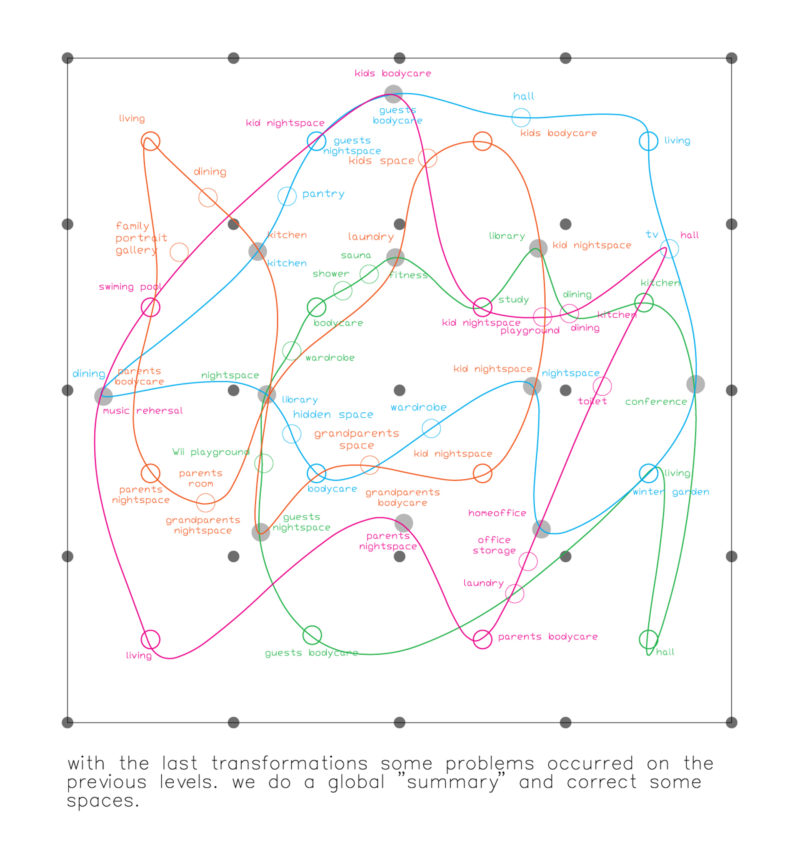 As a starting point we imposed 10 functions of high value for each family on each functional ring. Starting the transformation, we eventually got high quality spaces in terms of exposure, sunlight, mutual and neighbor relationships. A living room – the space seen as the most lively area of the house – started a series of further transformations giving unique features for each house. All the kitchens where paired up to catalyze a social interaction between families, enabling exchanging recipes or simply cooking together. After the first modifications of life-routes, some night spaces already had a satisfying condition of location, while others were in conflict with other homes or spaces belonging to the same house, so we had to correct their locations. Finally, we generated a typology of a house. We defined it as a narrative of small spaces of diverse locations connected with corridors that have a more-then-a-corridor potential. The length of a house enclosed large amounts of nature which eventually became the house itself. 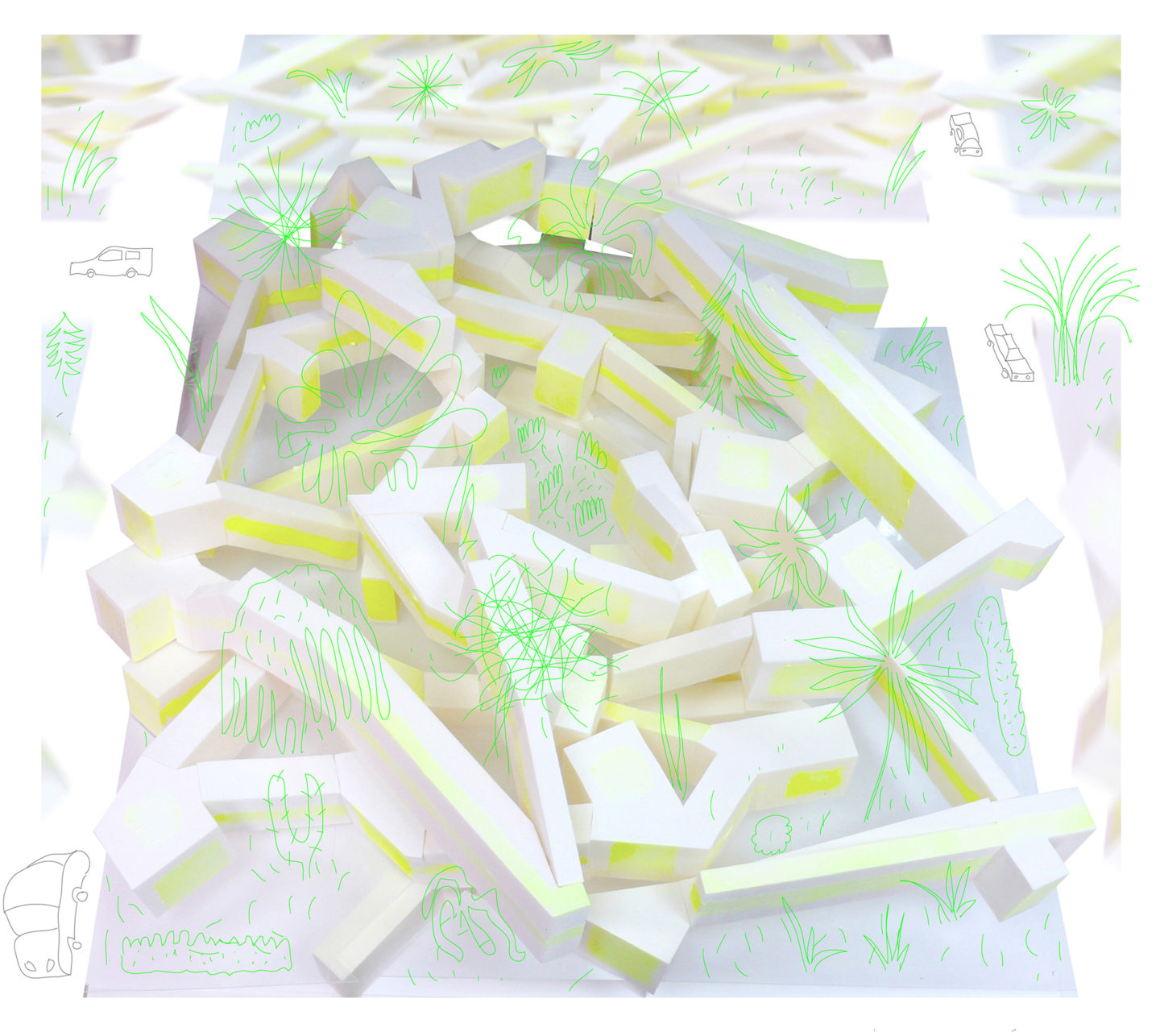 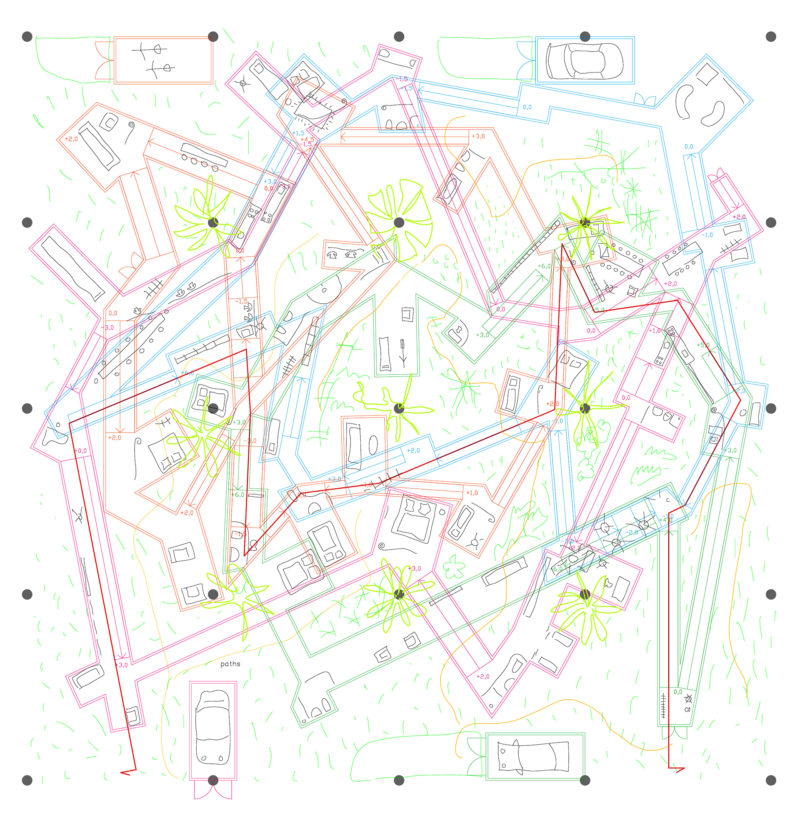 „This proposal appealed to me for its analysis of the relation between uses and spaces, which led to a series of diagrams establishing an architectural galaxy, a suggestive leitmotif for an architecture that is only alluded to in some sensitive drawings.” Rafael Moneo 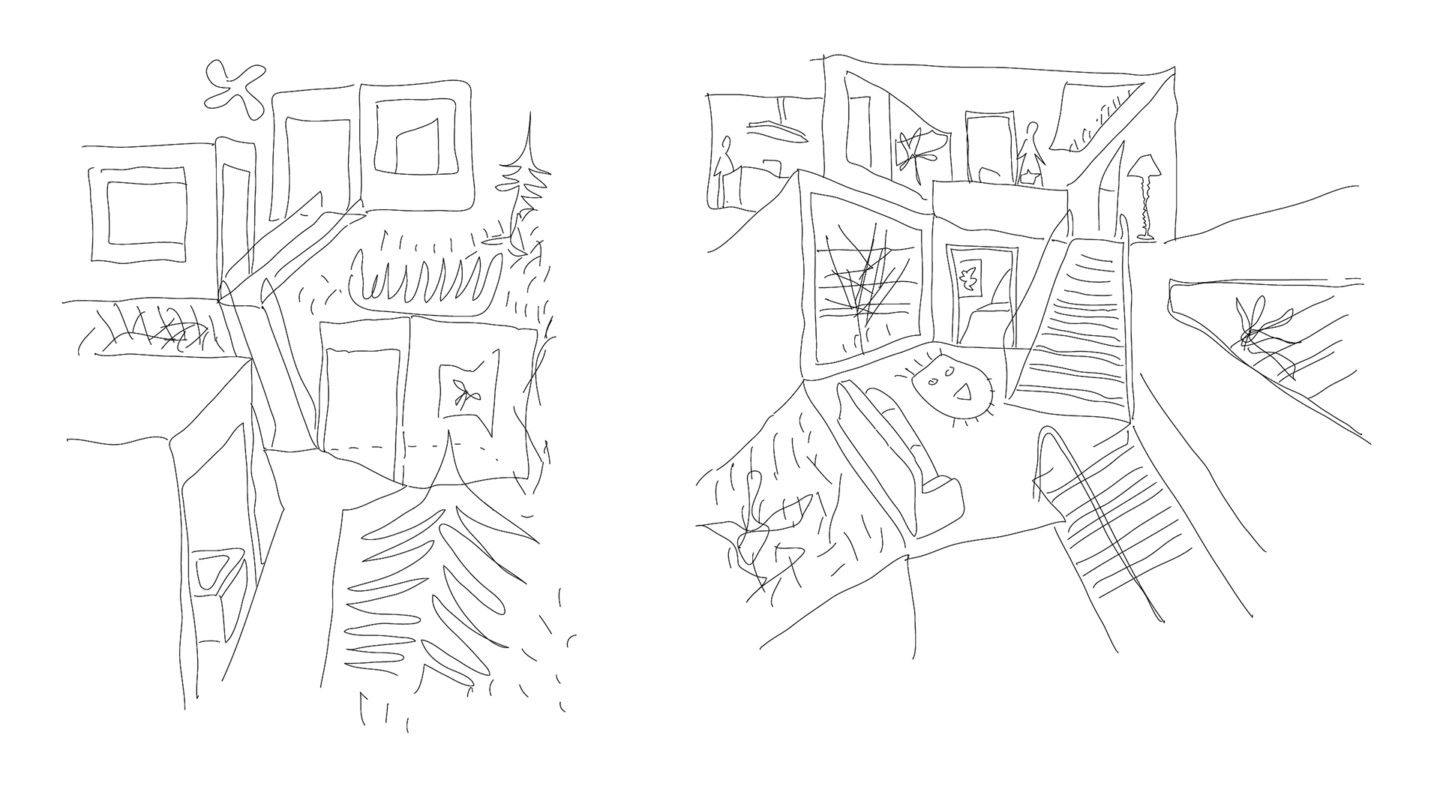